Under Pressure: How Hyperbaric Oxygen Therapy Can Promote Healing 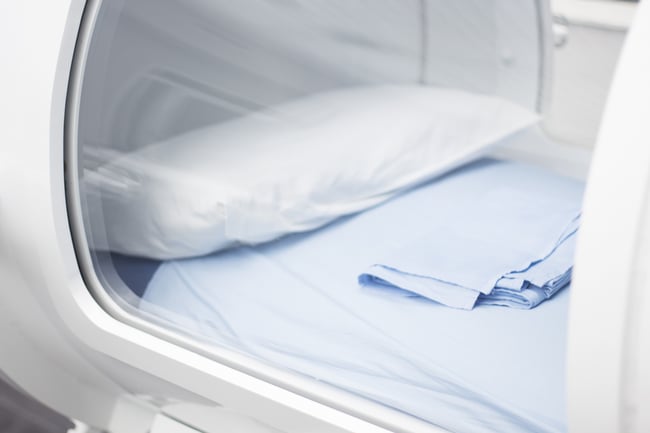 Hyperbaric oxygen therapy, or HBOT, is the infusion of pure oxygen deep into the tissues of the body.

Oxygen is essential for life and can provide many health benefits. There is a growing interest in hyperbaric oxygen chamber treatments as athletes and celebrities sometimes use oxygen therapy as a tool to promote healing after an injury. The earlier HBOT is administered, the better the opportunity for recovery. However, HBOT has been shown to resolve tissue swelling even after a lapse of years.

Conditions Where Hyperbaric Oxygen Chamber Therapy May be Helpful

Hyperbaric oxygen therapy, or HBOT, can be very helpful for scar and wound healing, burns, traumatic brain injury (TBI),  diabetic foot ulcers and decompression illness. While some of these are FDA-approved uses for HBOT, any illnesses that can benefit from increased oxygen, such as anemia, bacterial infections, and gas poisoning are potential indications. Hyberbaric is known to facilitate healing by increasing the amount of oxygen in the blood.

HBOT may also be used for diseases of the mitochondria such as autoimmune disease, Lyme Disease, Chronic Fatigue Syndrome, Fibromyalgia and age related degeneration including Type II diabetes, Parkinson’s, artherosclerosis, heart disease, autism, stroke, Alzheimer’s and cancer. Hyperbaric oxygen treatment may be covered by insurance or Medicare for some of these uses, such as decompression sickness, carbon monoxide poisoning, some brain and sinus infections, or necrotizing tissue infection. Hyperbaric oxygen treatment is more widely used in Britain and Europe for the treatment of stroke, cerebral palsy, spinal injury, and is currently being studied in the United States for similar uses.

What to Expect with Hyperbaric Oxygen Treatment

First time patients can expect some pressure on his or her chest as the hyperbaric oxygen chamber fills and those with claustrophobia may want to take an anti-anxiolytic herb to help until the body adjusts mid-session. Fatigue can be experienced in those who are sensitive to pressure changes and who have a hard time with detoxification.  On a positive note, patients often report a sense of euphoria, increased alertness and focus, and an increase in energy as well as symptom relief. Reported side effects have been fluid in the ears, lung collapse in those with untreated tension pneumothorax, sinus pain, myopia, and oxygen seizures although I have only seen fluid in the ears occur in one patient and sinus pain occur in 2 patients and have never personally witnessed any of the other side effects.

As part of the comprehensive Integrative Medical and Dental Center, NIHA has been offering hyperbaric oxygen chamber therapy for about 10 years and we use a gentler form of HBOT. Instead of the usual 2.0-4.0 atmospheres of pressure, we use 1.3. This can promote healing with less risk to the patient.

Autumn Frandsen N.D. is a Naturopathic Physician at National Integrated Health Associates, NIHA, serving Washington D.C., Maryland and Virginia. As a naturopath, her philosophy is to use the least invasive and effective method to bring balance to the body and restore health. Her areas of focus include Allergies, Environmental Medicine and Chemical Sensitivities, Homeopathy and Herbal Medicine, Heavy Metal Detoxification, Anti-Aging and Weight Loss. She was recently featured in Natural Awakenings magazine for her article on Helping to Solve the Mystery of Food Allergies.