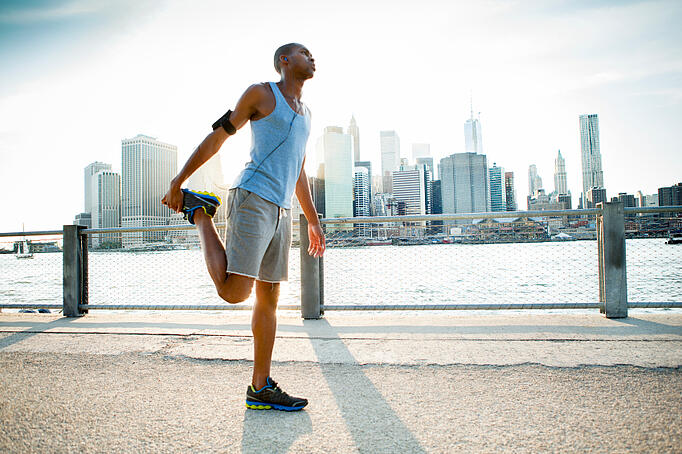 A little more genetic "get up and go" can be helpful, but too much of a good thing can be a bad thing. The same is true of the “under-methylators.” We all get 2 sets of genes from each parent, and those of us who get one abnormal methylation gene and one normal gene can get the benefits of more productivity and success, even though they can pay somewhat of a downside price by experiencing some extra stress. Those, like me, who get 2 abnormal genes, one from each parent, can be so sympathetically stressed to succeed, that even in our younger, more viable years, emotional stress can be overwhelming.  I often wondered why I was so driven and compelled to be the best at everything I did. It was a good thing I had sports to burn off that extra stress, and I am blessed with discovering mindfulness meditation in my 20’s, or else I could have become an emotional basket case.

How the Methylation Process Works…Like Runners in a Race

The mechanism of how methylation happens is like runners handing off the baton in a relay race.  Genetic testing helps us determine what is happening in your body specifically. Methyl groups come from various sources or donor molecules, which wind up on a type of folic acid called 5-MTHR or 5-methyl-tetra-hydro-folate.  That then hands off the methyl groups to B12, which in turn hands them off like a runner in a race to homocysteine which then becomes methionine, which turns into SAMe or s-adenosylmethionine which then hands off the methyl groups to dozens of different molecules, including noradrenalin, the anxiety-, perfectionism-, compulsivity-causing, fight/flight neurotransmitter to make it go away, and importantly also to a serotonin metabolite to synthesize melatonin so we can sleep more restfully.

The MFTHR and COMT Genes

That first step in the relay race is determined by an enzyme called MTHFR (methylene-tetra-hydro-folate-reductase) which is blueprinted from a gene by the same name, and if a quirky substitution occurs in this gene that results in a weaker methylation enzyme, it is like having a slower runner in the first leg of the race.  Ultimately the dozens of possible methylations that could happen at the end of the race don’t happen as well.  Again, a runner who is a little slower may confer advantages, while a very slow runner in the beginning of the race can lead to serious problems.  There are 6 possible genetic variations of MTHFR, which cause the first runner in the race to be slower by 30% up to 70%, depending on the inheritance patterns.

At the end of the race, another common, quirky gene (polymorphism is the proper term) called the COMT (catechol-O-methyl transferase) gene can exist, which can encode for slower a methylation step too.  That’s the one I have.  Some patients I have tested have serious methylation problems at both ends, that is, a slow runner in the beginning and at the end of the race, and they can really struggle with mental problems, addictions and other medical issues at any age.  Such individuals deserve our utmost medical attention, which is why I believe than it is important to functionally test every younger patient suffering from a mental disorder or an addiction for methylation defects, and equally important to test every middle-aged and older patient for these polymorphisms who have cancer and heart disease.

Methylation Genes are Common and Treatable

These methylation genes, like dozens of others genes I routinely test for in my practice, are common, important and modifiable.  The MTHFR and COMT SNPs (actually the proper term- single, nucleotide polymorphisms ) are very common, potentially very serious and their expression is extremely modifiable.   The MTHFR SNP can be treated with methyl-tetrahydrofolate, available over the counter in health-food stores or sometimes prescribed for the serious under-methylators in a more powerful form as a pharmaceutical called Deplin.

The COMT polymorphism can be treated with SAMe, available wherever supplements are sold.  Other minerals, B vitamins and nutrients can also assist those with methylation defects to lead normal lives too.  A word of caution though – we may not need to turn off all under-methylation tendencies in all people, because we still need the movers and the shakers. Although they are more likely to become the overbearing spouses, or hypercritical bosses or unpredictably creative artists... under-methylators nevertheless do have a tendency to get the job done and get it done well despite the emotional cost to themselves and others.

Looking at the genetic makeup and underlying causes of health issues is another important step toward personalized medicine.

Charles Gant MD, PhD, has practiced Integrative and Functional Medicine for over three decades. He specializes in molecular health and healing, especially as it supports growth and mental health recovery from problems such as ADHD, autism, mood problems, addictions, nicotine dependence, chronic diseases, metabolic and immune disorders, infectious disease, and more. He is an expert in interpretation of functional medicine testing to diagnose precisely what is deficient in each patient, and then replenish those missing, essential items.