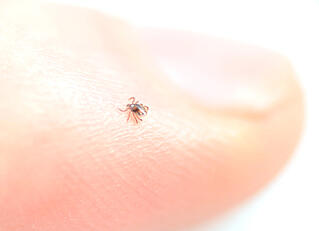 It is only May and we have already seen many people with brand new tick bites. It is supposed to be a terrible year for Lyme Disease & other insect-borne illness thanks to the bumper crop of acorns in 2010, a mild winter, and early spring.

I'm reminded of the other things we learned in Oct 2010 when I was lucky enough to participate in a workshop sponsored by Institute of Medicine on Lyme Disease and Other Insect Borne Diseases / Illnesses. It was there for the first time ever that Medical Doctors, PhD's, Veterinarians, Entomologists, and Environmentalists gathered from Harvard, Yale, Columbia etc and we learned valuable information.

It was understood that we did not have to have consensus and most of us felt the best we could hope for was to “agree to disagree”, but that was not the case on the subject of Lyme disease testing.  In this area everyone agreed the testing in most cases may not be accurate and should not be used over clinical symptoms.

One source of new Babesia infections is our donor blood supply because the testing is inadequate and misses many people who are positive but donate blood not knowing they have the infection. People with these infections should not donate blood.

One of the take home messages for Primary Care Provider's was that if someone presents with fatigue as a new symptom you may want to consider a therapeutic trial of Doxycycline and not wait for lab test results.

I've provided some of the key points from this 2 day meeting, and please note the majority of these presenter's are traditional doctors and from very reputable institutions.

I sat next to Matt Laing, MD of Harvard and he reported to us that less than 30% of his patients at Harvard have the classic "EM" (bulls eye) rash, and that 100% of the year round population of Martha's Vineyard, a popular seaside resort, is positive for Babesia, a parasite that lays eggs in muscles and tissue causing fatigue, sweats, and is in the same family as Malaria and co-morbid in many Lyme disease patients. I am afraid we are going to learn in the very near future that the populations in our area with beaches and islands have an even higher rates of insect illnesses than we currently know.

Another very important piece of information we learned is that it is not necessarily the first tick bite that is a problem, as most healthy people can handle one. The doctor went on to explain that if a man starts cutting his grass at age 20 they will under estimate it and say he will be exposed to an infected insect (tick, mosquito or flea) once per month and that by the time he is in his 40-50’s he will present to and ER with chest pain, shortness of breath, and doctors may not consider insect illness, but the symptoms will probably be attributed to aging or lifestyle.

We learned that a  number of deaths from insect illnesses  in 2010 were in children under the age of 8 because Doxycycline wasn’t used and is needed in this age group. Doxy is said to stain teeth which they informed us was an “urban legend” as that only applies to Tetracycline.

Susan O’Connell, M.D. is head of the Lyme Borreliosis Unit (LBU) at the Health Protection Agency’s Microbiology Laboratory at Southampton University Hospitals Trust, Southampton UK. She was very informative since they have been dealing with Lyme disease since the 1930's-40's.

Educate Yourself About Lyme Disease

I have made educational presentations for Fairfax County's Lyme Disease Town Hall Meeting sponsored by Supervisors Frey and Herrity, and the town of Monkton, Maryland and multiple other groups. I am always surprised to hear the “horror” stories so many families face every day with the prevalence of Lyme disease in Virginia and Maryland.

I implore physicians, nurses and all healthcare providers to please consider attending some of the educational conferences to stay current with the most up-to-date information on Lyme disease and co-infections.

To stay current on the latest research I attend The American College for the Advancement of Medicine (ACAM) meeting twice per year for continuing education, International Lyme And Associated Diseases Society (ILADS) yearly meeting, and Physician's Round Table yearly meeting. In 2007 I learned of the connection between Lyme and Autism at the very first Lyme Induced Autism (LIA) Think Tank and Conference in 2007.

Knowledge is power and with more knowledge we can help more people.

Lyme Disease May Be Worse Than Ever This Year